Happy Iranian Nov'rooz & the Other Holidays which are going to be with us soon, to all of you the dear readers of tanehnazan.com
Rocket fire from Gaza kills man 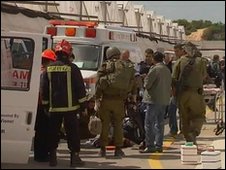 'US pressure on Israel paid off' Violence could spread across the Middle East with Israel paying a "heavy price" if it launched military action against Iran, the deputy leader of Hezbollah said Thursday.Israel sees Iran's nuclear programme as a threat to its existence and has not ruled out military action if diplomacy fails to curb the Islamic Republic's atomic work. (Reuters)
Iran: Prevent Israeli destruction in holy sites

In a letter addressed to the foreign ministers Syria, Lebanon, Indonesia and Jordan Mottaki called for a "united stance to prevent the Zionist regime's plots in Jerusalem." (Dudi Cohen)

Report: US shipping arms ahead of strike on Iran
10000 targets in a few hours 
Opposition leader Tzipi Livni said during a special Knesset session in honor of Brazilian President Luis Lula Da Silva that a solution to the Israeli-Palestinian conflict "would not change the Iranian leader's goal to wipe the State of Israel off the map".
She called on the Brazilian leader to support President Shimon Peres' proposal to have Iran removed from the UN. (Amnon Meranda)
Livni: Iran's hatred not because of Palestinians
Opposition chairwoman Tzipi Livni said during a meeting
with Brazilia

resident Luiz Inácio Lula da Silva, that Iran's hatred toward Israel does not stem from the conflict with the Palestinians.

"Tehran is exploiting the situation to gain support for its radical struggle. The free world, including Brazil, cannot accept a country that exports an agenda of war and arms the entire region in order to realize its extremist anti Christian and anti Jewish ideology," Livni said. (Roni Sofer)
Posted by تنه نزن at 12:28 PM