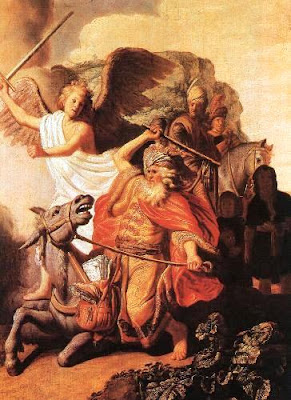 Which is Mightier The Word or the Sword?
Balaam's death by sword at the hands of the Israelites is ironic retribution for his verbal power over them

The following article is reprinted with permission from Hillel: The Foundation for Jewish Campus Life.
Your Torah Navigator
The story of Balaam, the gentile prophet who knows and speaks with God, is one of the stranger narratives in the Torah. The outsider who talks and behaves like an insider.
Generally, everyone spends a lot of time trying to understand Balaam's relationship to God, God's messenger and the talking ass. I would like to see Bil'am's story in the context of Balaam's life.
Take a look at chapter 22, especially the following verses, and then look at Numbers 30:8. Why does Balaam end up dying by the sword?
Numbers 22:20-35
(20) And God came to Balaam at night, he said to him: Since it is to call you that the men have come, arise, go with them; but only the word that I speak to you, that (alone) may you do.
Balak
a summary of the portion

Cursing and Blessing the Israelites

Miriam and Aaron die and Moses and the Israelites must fight against the Edomites, Canaanites, Emorites and Amorites to continue toward God’s Promised land.  Each time God helps the children of Israel win.   Now, Balak, the King of Moab, saw how the Hebrews had won these wars.
Balak sends messengers to Balaam, and son of Beor, to tell him about the powerful Hebrews,  “Come with us Balaam to curse these Hebrews.  We know that whomever you bless Balaam is blessed and whomever you curse is cursed.”  Balaam answered.  “Spend the night here.  God will speak to me and then I will give you an answer.”  Later God said to Balaam, “Who are these people?”  Balaam answered “Balak has sent messengers to ask me to curse the Hebrews and drive them out.”  God says to Balaam.  “No. Do not go with them! You will not curse the Hebrew people for they are blessed.”

Reading With Rashi
Parashat Balak
Rabbi Laura Geller
“Anyone who has never read the entire Chumash with Rashi is simply not Jewishly literate,” said Rabbi David Hartman, with whom I was studying 14 years ago at the Shalom Hartman Institute in Jerusalem. “It doesn’t matter whether you read it in Hebrew or English, but you must go through the Five Books of Moses with Rashi’s commentary.”
Inspired by Hartman’s words, I announced to my congregation that I would be reading Torah with Rashi every Sunday morning, and anyone who wanted to join me was welcome. So every Sunday morning for the past 14 years, a group of Temple Emanuel congregants meets for an hour and a half and reads verses from Torah in English with Rashi, the 11th century commentator through whose lens we interpret Torah.
Haftarah for Balak
a summary of the haftarah
In this week's haftarah Micah gives a series of short prophecies directed at the Israelites in exile, whom he refers to as the "remnant of Jacob." Though the people may feel like droplets of dew, hopelessly spread out upon other nations, their renewal will come from God. Ultimately, they will rise like a lion and trample their foes. This transformation, from a tiny drop of water to the king of all animals, symbolizes the changes that will come to the people of Israel. They will go from being very weak to very strong.  Even while Micah is encouraging the exiled nation, he warns them that on the very same day that they vanquish their foes, their own idols and false gods will be demolished. Soothsayers and sorcerers will be destroyed. While God gives His nation strength, he will wreak havoc on those who still believe in other gods.
NEWS
Haredim: World Cup waste of time
As country excitedly watches World Cup, soccer tournament not covered by ultra-Orthodox media outlets. Mishpacha editor tells Ynet, 'The values we strive for are ethics, spiritual living, and principled living. World Cup symbolizes opposite. It is just like any other addiction' 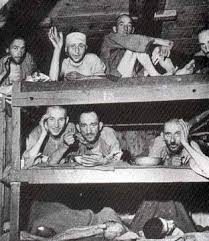