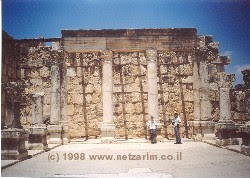 Weekly TORAH Portion
Parashat Vayishlah
After years of contention, Jacob and Esau are reconciled. Their relationship is somewhat awkward, and they will never be the closest of brothers. Still, for the first time each can accept the other as he is; each can see the other's wealth without coveting it. What has changed? How can two people who tricked and threatened to kill each other embrace? 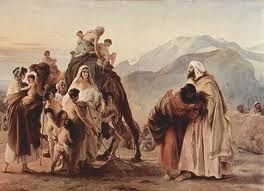 Vayishlah,
a summary of the portion
Many years after his marriages to Rachel and Leah, Jacob received word from God that it was time to return home. Jacob sent messengers ahead to meet his brother Esau. "Tell him that his servant Jacob has been with Laban until now. Tell him that I have acquired herds and flocks and servants. Tell him I seek favor in his eyes." 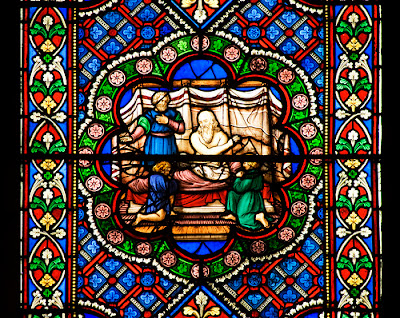 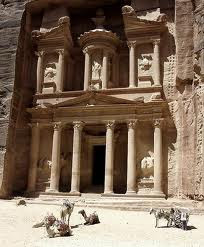 Petra Site of Ancient Edom
According to rabbinic tradition, Obadiah was a convert to Judaism from Edom and a servant in the court of Ahab and Jezebel, the king and queen of Israel. Though it's not clear exactly when he lived, his prophecy is mainly concerned with how the Edomites mistreated the Israelites, which was likely in the aftermath of the destruction of the first Temple.

Reasons for Erecting a Tombstone 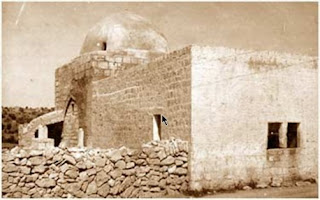 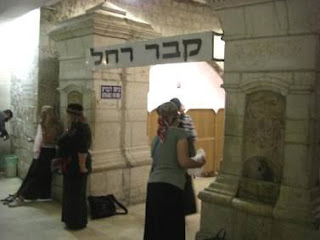 Daf Parashat Hashavua
(Study Sheet on the Weekly Torah Portion)
"Rachel died and was buried on the road to Efrat, in Bethlehem. On her grave Jacob erected a monument, which, to this very day, is known as Rachel's monument" (Genesis xxxv:19-20).Parshat "Vayishlakh"
Rachel's Tombstone: The Reasons for Erecting a Tombstone
Prof. Ya'akov S. Spiegel
Department of Talmud
This is the first time we encounter in our tradition the concept of a tombstone, or a memorial marker. Furthermore, this is the only place in the Bible where a tombstone erected on an individual's grave is specifically mentioned. Although several references to burial are made elsewhere in the Bible, none of these are accompanied by the mention of a tombstone or any other such structure having been erected over a grave. There is, in fact, an additional reference in the Bible to a memorial monument: "Absalom erected his own tombstone in the Valley of the King, for Absalom said, 'I have no son who will remember me after I die.' He named the monument 'Absalom's Tomb', which has remained the monument's name to this very day." (II Samuel xviii:18) However, in this verse, Absalom's Tomb is not referred to as a tombstone, but rather as a structure erected in a particular place in order to serve as a memorial. Furthermore, the structure is known as Absalom's Tomb during his lifetime.
Posted by تنه نزن at 12:08 AM