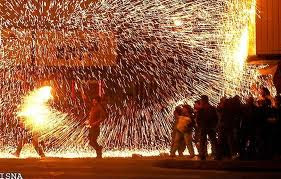 The Norooz holiday season includes several symbolic and meaningful celebrations and rituals beginning with the last Wednesday of the year, called the Chahar Shanbeh Soori (translation yields "Wednesday Fire").On Tuesday evening (the night before the last Wednesday) every family celebrates the Chahar Shanbeh Soori.
At the center of this traditional celebration is giving thanks for the fortune of having made it through another healthy year and to exchange any remaining paleness and evil with the life and warmth of the fire. Chahar Shanbeh Soori is deeply rooted in Iranians' Zoroastrian past (Persian people's dominant religion prior to Islam). The part of this night especially popular with the youngsters is the bonfire. Every family gathers several piles of wood or brush to be lit shortly after the sunset.


All family members line up and take turns jumping safely along (and over) the burning piles, singing to the fire:
"Sorkheeyeh toe az man; zardeeyeh man az toe."


This may be roughly  translated into: "Your redness (health) is mine; my paleness (pain) is yours." 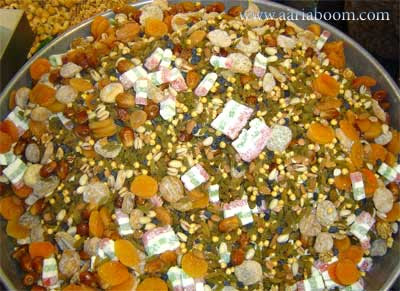 Although a recent addition and generally against the law in the urban areas, the sights and sounds of fireworks are very common to this night.


Another routine of the Chahar Shanbeh Soori festival is the Iranian version of Trick or Treating associated with the Western Halloween night. Flocks of often young trick , hidden under a traditional Chador (veil) go from door to door banging a spoon against a metal bowl asking for treats or money.
Another old and almost obsolete Chahar Shanbeh Soori ritual is  (fortune hearing!) This ritual was carried out usually by young women wanting to know their chances of finding the "Mr. Right" in the coming year. Falgoosh is the act of standing in a dark corner or behind a wall and listening to the conversations of the passersby and trying to interpret their statements or the topic of their dialogue as an answer to one's question(s)! This is analogous to calling a psychic reader to find out your fortune!
In the past several decades Falgoosh has gradually become an almost unacceptable and "politically incorrect" ritual and is seldom practiced in the major urban areas. 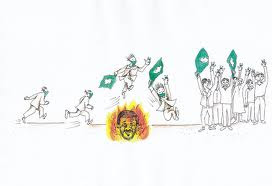 This is another ritual in which someone makes a wish and stands at the corner of an intersection , or on a terrace or behind a wall. That person will know his fortune when he overhears conversation of a passerby.
Posted by تنه نزن at 10:36 PM