Sent by Dariush Fakheri
Netanyahu in 1978 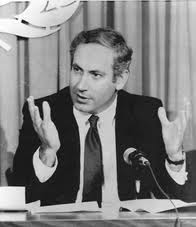 In a remarkable video from 1978, 28 year old MIT grad Benjamin Netanyahu debates whether there should be a Palestinian state created on the West Bank and Gaza.  Netanyahu argues that such  a state would have but one  goal: to destroy the Jewish state of Israel. He reviews the history from 1948 to 1967,  when Gaza was controlled by Egypt and the West Bank by Jordan and there were no calls to end the occupation, or for national sovereignty for the Palestinians.
But one thing was similar in that period and today: terror attacks against Israeli Jews.   Netanyahu went by the name of Benjamin Nitay at the time. His brother, Yonatan was an Israeli commando who  led the Entebbe raid on July 4, 1976 during which he died.  Netanyahu chose to use the name Nitay at MIT, where he was one year behind me, in large  part for security reasons due to his brother's notoriety and the spate of Palestinian terror attacks aimed at Israelis all over the world. 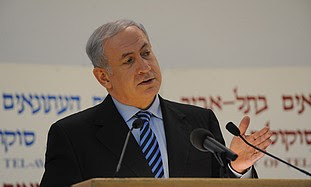 One of Netanyahu's interrogators in the clip is Fouad Ajami, the well known political analyst.
Netanyahu's  strong defense of Israel rings as true today as it did in 1978.  The clip is only ten minutes and is well worth watching.
Posted by تنه نزن at 7:22 PM