Fourty Five Years Ago today, the Six-Day War began when the Israel Air Force launched a preemptive strike against Egyptian forces mobilized in the Sinai Peninsula.
At the time, Hillel Erman was a 30-year-old staff sergeant serving in a reserve unit of the IDF Paratroopers Brigade. He sat down with us earlier this week and answered a few questions about his memories of the Six-Day War.
Six-Day War veteran Hillel Erman (Photo by Zev Marmorstein)
Do you remember the lead-up to the war? 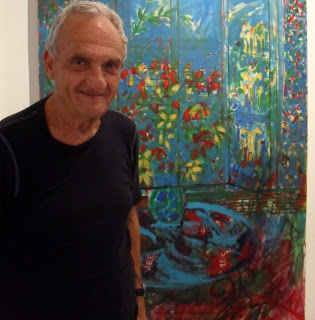 Yes, I remember it well, like it was yesterday. I remember when Egypt closed the Straits of Tiran and prevented Israeli ships from entering or leaving Eilat. And I remember when Egypt mobilized its forces in the Sinai Peninsula — and expelled the U.N. troops that were in the area. The prime minister at the time was Levi Eshkol. He was under tremendous pressure to do something against the threat. The reserves could not stay mobilized forever, nor could they go home in the face of such danger.
Menachem Begin, who was in the Knesset opposition, joined the governing coalition, which strengthened the resolve of the public. People were very scared. They saw how the Arab nations around us were preparing for war, and we didn’t do anything.
Where were you at the time?

I was called up 18 days before the war started. My brigade, the 35th, was in the Ben Shemen forest near Jerusalem. We practiced in the forest so that no one could see the training. I remember the time there was boring — we didn’t know when the war was going to start, and we just waited.
The army was pressuring the government to make a decision — either attack or send the soldiers home. I remember that I was wondering what I should take with me on the plane, since I couldn’t carry much on me with all my parachuting gear. I didn’t know if I should take more clean underwear or more food — I didn’t know what to expect. At some point, my unit was moved to Kibbutz Nahal Oz, on the Gaza border. The Egyptians fired on the Kibbutz and the fields around it caught on fire. Some of the other soldiers in my brigade had lived on kibbutzim before, and they knew how to deal with such things. We all helped to put out the fire. 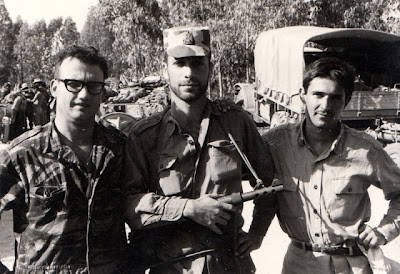 Where did you serve during the war itself? How was it when the war started?

In early June, we were moved near the Egyptian border and were told to wait until someone called us on the secure Red Line and gave us the code for the green light. At 7 a.m. on June 5, we received the call with the secret code — “Red Sheet”. We heard that the Israel Air Force bombed the Egyptian Air Force.

It was a very difficult fight. We were two Paratroopers Brigades and 30 tanks from the 7th Armored Brigade. The battle took place in Rafah, and the Egyptians were hiding in 12 km long ditches. After 24 hours, the battle was over. Out of 600 Israeli soldiers, 30 were killed and 40 were injured. One of the soldiers who was killed was my officer.
After Rafah, we were sent to Khan Yunis and then to the Suez Canal. On our way to the Suez Canal, two Egyptian planes attacked my brigade on the road. Two soldiers were killed. By the time we arrived at the canal, the war was already over.
What was the IDF’s biggest achievement in the war?
The biggest achievement was that the IAF targeted Egyptian runways in order to prevent the Egyptian Air Force from taking off. Then, the IAF bombed the Egyptian planes that were stuck on the ground. All in all, our Air Force destroyed an 80 percent of the Egyptian Air Force, which was much stronger than ours at the time. 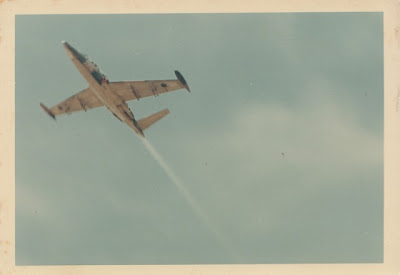 An IDF fighter jet flies overhead. (Photo courtesy of Hillel Erman)
Do you have any other specific memories from the war?

In El-Arish, my commander, Raful Eitan, who later became the Chief of Staff, was shot in the head from one of the tunnels. The bullet scratched his forehead, went into his helmet and came out from the middle of it. He was taken to the hospital, and for some time my brigade didn’t have a commander.

After a while, a new commander came to take over. He didn’t know the exact location of the brigade, and he asked me on the two-way radio to give him our location. It was forbidden at the time to broadcast such precise information on the radio, in case the Egyptians were listening. In order for him to prove his identity, I asked him for the color of his beard. When he answered that his beard was black and white, I knew who he was, and he gave me an order to tell him where we were.
What did you do after the war?

I left the army for a while and went to study, and then joined the army again, as a career officer, and served in the Paratroopers Brigade. After eight years, I retired from the army with the rank of Lieutenant Colonel and returned to reserve duty. During my reserve duty, I served in a secret unit. 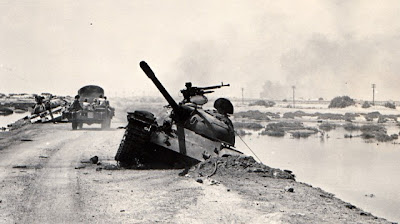 A damaged Egyptian tank on the side of the road. (Photo courtesy of Hillel Erman)
Did you participate in any other wars? What do you do today?

Yes. I was 19-years old and in active duty during the Sinai Campaign. I also participated in the Yom Kippur War and the First Lebanon War. Today, I participate in a lot of charity work, and play soccer every Friday with a group of friends. 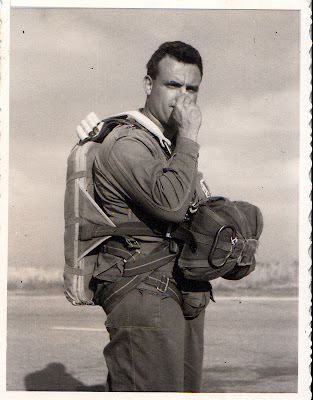 Hillel Erman stands with his parachuting equipment. (Photo courtesy of Hillel Erman)
Posted by تنه نزن at 3:08 AM