God’s word came to Jeremiah to say that before God formed him in the womb, God knew him, sanctified him, and appointed him a prophet to the nations. (Jeremiah 1:4–5.) Jeremiah protested that he could not speak, for he was a child, but God told him not to fear, for he would go wherever God would send him, say whatever God would command him to say, and God would be with him to deliver him. (Jeremiah 1:6–8.) Then God touched Jeremiah’s mouth and said that God had put words in his mouth and set him over the nations to root out and to pull down, to destroy and to overthrow, to build and to plant. (Jeremiah 1:9–10.) God asked Jeremiah what he saw, he replied that he saw the rod of an almond tree, and God said that he had seen well, for God watches over God’s word to perform it. (Jeremiah 1:11–12.) 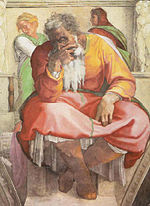 Jeremiah by Michaelangelo
God’s word came to Jeremiah a second time to ask what he saw, he replied that he saw a seething pot tipping from the north, and God said that out of the north evil would break forth upon all Israel. (Jeremiah 1:13–14.) For God would call all the kingdoms of the north to come, and they would set their thrones at Jerusalem’s gate, against its walls, and against the cities of Judah. (Jeremiah 1:15.) God would utter God’s judgments against Judah, as its people had forsaken God and worshipped the work of their own hands. (Jeremiah 1:16.) God thus directed Jeremiah to gird his loins, arise, and speak to the Judean people all that God commanded, for God had made Jeremiah a fortified city, an iron pillar, and brazen walls against the land of Judah, its rulers, its priests, and its people. (Jeremiah 1:17–18.) They would fight against him, but they would not prevail, for God would be with him to deliver him. (Jeremiah 1:19.)
God’s word came to Jeremiah to tell him to go and cry in the ears of Jerusalem that God remembered the affection of her youth, her love as a bride, how she followed God in the wilderness. (Jeremiah 2:1–2.) Israel was God’s hallowed portion and God’s first-fruits, and all that devoured Israel would be held guilty and evil would come upon them. (Jeremiah 2:3.) 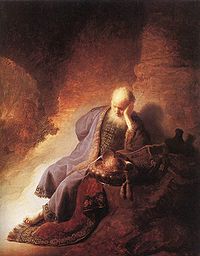 
Connection to the special Sabbath

The first of three readings of admonition leading up to Tisha B'Av, the haftarah admonishes Judah and Israel in Jeremiah 1:13–19. And then in Jeremiah 2:1–3, the haftarah concludes with consolation. The Gemara taught that Jeremiah wrote the book of Lamentations (Babylonian Talmud Bava Batra 15a), and as Jews read Lamentations on Tisha B’Av, this probably accounts for why a selection from Jeremiah begins the series of haftarot of admonition. (Michael Fishbane. The JPS Bible Commentary: Haftarot, 262. Philadelphia: Jewish Publication Society, 2002. ISBN 0-8276-0691-5.)