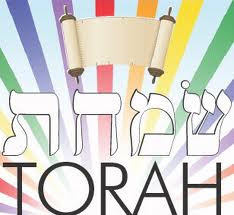 Level: Basic
Significance: A follow-up to Sukkot; the completion of the annual cycle of Torah readings
Length: 2 days (Some: 1 day)
Customs: Limited "dwelling" in the sukkah; dancing and rejoicing with Torah scrolls
...On the fifteenth day of this seventh month is the Festival of Sukkot, seven days for the L-RD... on the eighth day, there shall be a holy convocation for you. -Leviticus 23:34
Tishri 22, the day after the seventh day of Sukkot, is the holiday Shemini Atzeret. In Israel, Shemini Atzeret is also the holiday of Simchat Torah. Outside of Israel, where extra days of holidays are held, only the second day of Shemini Atzeret is Simchat Torah: Shemini Atzeret is Tishri 22 and 23, while Simchat Torah is Tishri 23.
These two holidays are commonly thought of as part of Sukkot, but that is technically incorrect; Shemini Atzeret is a holiday in its own right and does not involve some of the special observances of Sukkot. We do not take up the lulav and etrog on these days, and our dwelling in the sukkah is more limited, and performed without reciting a blessing.
Shemini Atzeret literally means "the assembly of the eighth (day)." Rabbinic literature explains the holiday this way: our Creator is like a host, who invites us as visitors for a limited time, but when the time comes for us to leave, He has enjoyed himself so much that He asks us to stay another day. Another related explanation: Sukkot is a holiday intended for all of mankind, but when Sukkot is over, the Creator invites the Jewish people to stay for an extra day, for a more intimate celebration. 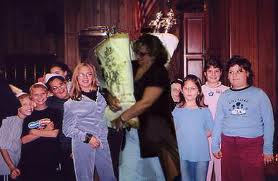 Simchat Torah means "Rejoicing in the Torah." This holiday marks the completion of the annual cycle of weekly Torah readings. Each week in synagogue we publicly read a few chapters from the Torah, starting with Genesis Ch. 1 and working our way around to Deuteronomy 34. On Simchat Torah, we read the last Torah portion, then proceed immediately to the first chapter of Genesis, reminding us that the Torah is a circle, and never ends.
This completion of the readings is a time of great celebration. There are processions around the
synagogue carrying Torah scrolls and plenty of high-spirited singing and dancing in the synagogue with the Torahs. Drinking is also common during this time; in fact, a traditional source recommends performing the priestly blessing earlier than usual in the service, to make sure the kohanim are not drunk when the time comes! As many people as possible are given the honor of an aliyah (reciting a blessing over the Torah reading); in fact, even children are called for an aliyah blessing on Simchat Torah. In addition, as many people as possible are given the honor of carrying a Torah scroll in these processions. Children do not carry the scrolls (they are much too heavy!), but often follow the procession around the synagogue, sometimes carrying small toy Torahs (stuffed plush toys or paper scrolls).
In some synagogues, confirmation ceremonies or ceremonies marking the beginning of a child's Jewish education are held at this time.