Israel, The Third Nation On The moon? 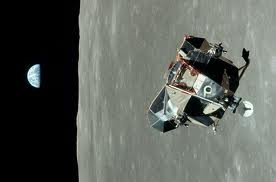 Israel, The Third Nation on the Moon?

Mar. 30 2011
If all goes according to plan, by December 2012 a team of three young Israeli scientists will have landed a tiny spacecraft on the moon, explored the lunar surface, and transmitted live video back to earth, thereby scooping up a $20 million prize (the Google Lunar X Prize), revolutionizing space exploration, and making the Jewish State the third nation (after the U.S. and Russia) to land a probe on the moon. And they’re doing it in their spare time.
The three engineers – Yariv Bash (electronics and computers), Kfir Damari (communication systems), and Yonatan Winetraub (satellite systems) all have high-level day jobs in the Israeli science and technology world, and also both teach and study. They all had heard of the Google Lunar X Prize independently, before being introduced by mutual friends who, as Yonatan puts it “thought we were all crazy enough to do it, so we should meet each other.”
By the end of November 2010 they had sketched together a novel plan to win the prize and submitted it to organizers. Only on December 21 (10 days before the December 31 deadline) did they set about raising the $50,000 entry fee. “Like good Israelis we left it to the last minute,” Yonatan laughs.
Since then they’ve recruited around 50 volunteers from across the Israeli science and technology community and have gained support from academic institutions, including the prestigious Weizmann Institute of Science (founded in 1933 by Chaim Weizmann, himself a successful chemist who went on to become Israel’s first president). They’re operating as a non-profit (“we’re looking for stakeholders,” says Project Coordinator Ronna Rubinstein), and any winnings will be invested in promoting science among Israeli youth.
The X Prize’s organizers say their competition is intended to attract “mavericks” who “take new approaches and think creatively about difficult problems, resulting in truly innovative breakthroughs.” They see the moon as a largely untapped resource, and believe that “inexpensive, regular access to the Moon is a critical stepping stone for further exploration.”
Maverick and creative thinkers the Israeli trio appear to be: According to the X Prize organizers, the 29 competing teams will spend between $15 million and $100 million on the project, with the earliest launch not scheduled until 2013. The Israelis aim to spend less than that (around $10 million) and to launch before 2013.
“One of reasons that we’re able to do this,” Kfir (who started programming aged six and wrote his first computer virus aged 11) explains, “is because of our different perspective. Most space missions aim to last many years and so have to be built in a certain way. Ours doesn’t have to last as long. This saves cost.”
Another way the team intends to keep costs down involves utilizing existing technology that just hasn’t previously been linked up for this purpose, rather than spending a new fortune. Naturally the team isn’t releasing specific details of the technology they’re using, but they’re confident that they’ve got what they need.
And once they’re on the moon? “The actual robot will be something the size of a coca-cola bottle,” says Yonatan. “Think about it – a cell phone has most of the capabilities necessary for communication and imaging, and to that we need to add a hopper” to move around the moon. “Simple” really. And the impact of this? “Once we do this it will break the glass ceiling,” Yonatan adds, “and show that space exploration doesn’t have to be expensive.”
As to why they got involved? “Three reasons,” say Yonatan,  “Creating national pride, really putting Israel on the map as a start-up nation by doing something only the superpowers have done, and reigniting Israeli interest in science.” And it’s the third – rejuvenating interest among Israeli youth in science – that’s closest to these young scientists’ hearts.
In the 1960s and 1970s, they say, many young Israelis pursued careers in science, in part inspired by the American space program. Today that isn’t the case, and the number of high school seniors majoring in science is constantly declining. “We want to show that science isn’t just about sitting in a lab all day,” says Kfir.
In 1919 French hotelier Raymond Orteig offered $25,000 for the first non-stop flight between New York City and Paris. Eight years later Charles Lindbergh, considered an underdog, won the prize by making the crossing in his “Spirit of St. Louis.” That not only changed the way people saw flying, but how they saw the world.
The X Prize was inspired by the Orteig Prize, and if the “Spirit of Israel” is successful they can certainly count on changing how young Israelis see science and how others see Israel. They may also change how we all see the universe.
Daniel Freedman is the director of strategy and policy analysis at The Soufan Group, a strategic consultancy. His writings can be found at www.dfreedman.org. He writes a fortnightly column for Forbes.com.
Posted by تنه نزن at 9:02 AM