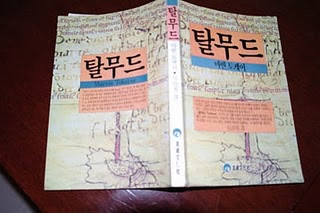 The following fascinating article was translated by The Muqata from YNET.
Update: After receiving a personal thank you letter from the South Korean Embassy in Israel for this blog post, I have made a few minor updates to the article below at the Embassy's request, to better reflect Talmud (탈무드) Study in Korea YNET has reposted an updated version as well.
Close to 50 million people live in South Korea, and almost everyone is taught the Talmud at home by their parents. "We tried to understand why the Jews are geniuses, and we came to the conclusion that we think it is because they study Talmud," said the Korean ambassador to Israel, Mr. Young Sam Ma. And this is how "Rav Papa" became a more well known scholar in Korea than in Israel.
It is doubtful if the Amoraic scholars, Abbaye and Rava imagined their discussions of Jewish law in the Beit Midrash in Babylon would be taught hundreds of years later in East Asia. Yet it turns out that the laws of an "egg born on a holiday" ("ביצה שנולדה ביום טוב") is actually very interesting to the South Koreans who have required that Talmud study be part of their compulsory school curriculum. [Note from Jameel: The Korean Embassy in Israel probably received alot of complaints about Talmud being part of the compulsory school curriculum, and requested that the statement read: “Yet, it turns out that… is actually very interesting to the South Koreans who encourage Talmud learning at home”.]
Almost every home in South Korea now contains a Korean-translated Talmud. But unlike in Israel, the Korean mothers teach the Talmud to their children. In a country of close to 49 million people who believe in Buddhism and Christianity, there are more people who read the Talmud - or at least own their own copy at home - more than in the Jewish state. Much more.
"So we too will become geniuses"
"We were very curious about the high academic achievements of the Jewish people”, explains Korean Ambassador to Israel, Mr. Young Sam Ma, who was hosted on the channel 1 TV programme “Culture Today”."
"Jews have a high percentage of Nobel laureates in all fields: literature, science and economics. This is a remarkable achievement. We tried to understand what is the secret of the Jewish people? How they - more than other people - are able to reach those impressive accomplishments? Why are Jews so intelligent? In our opinion, one of your secrets is that you study the Talmud”.
"Jews study the Talmud at a young age, and it helps them, in our opinion, to develop mental capabilities. This understanding led us to teach our children as well. We believe that if we teach our children Talmud, they will also become geniuses. This is what stands behind the rationale of introducing Talmud Study to our school curriculum." Jameel adds: Again, The Muqata was requested to remove the school curriculum comment, and replace it with, "This is the rational to make Talmud a part of home education in Korea”
Ambassador Ma says the he himself studied the Talmud at a very young age: "It is considered very significant study," he emphasized. The result is that more Koreans have Talmud sets in their homes than Jews in Israel.
“I, for example, have two editions of Talmud: one my wife bought and the other I got from my mother in law”. [Jameel adds: Almost like the Jewish tradition of the parents of the bride buying a set of Talmud for their future son-in-law...]
Groupies of Jews
Koreans don't only like the Talmud because they see it as promoting genius, but because they found values that are close to their hearts.
"In the Jewish tradition, family values are important," explains the South Korean Ambassador.
"You see it even today, your practice of the Friday evening family meal. In my country we also focus on family values. The respect for adults, respect and appreciation for the elderly parallels the high esteem in my country for the elderly."
Another very significant issue is the respect for education. In the Jewish tradition parents have a duty to teach their children, and they devote to it lots of attention. For Korean parents, their children's education is a top priority. (YNET)
The photo above of a Talmud translated into Korean,
is courtesy of the South Korean Embassy to Israel.
Posted by تنه نزن at 9:10 PM