For the important News of the world
( in English, Farsi and Hebrew )
Please visit us every day


Tanehnazan: " Another agreement between
East ( Khamenei ) and West ( Rouhani )
: Khamenei recommits to 190.000
centrifuges in 15 years
He also readies Tehran to update
enrichment ( Billions of more $$$ for
Russia's presence to protect its political!
and economical! interests by its great
agent the supreme leader of Iran just
like the past 37 years )
25th. of Octobe 2015 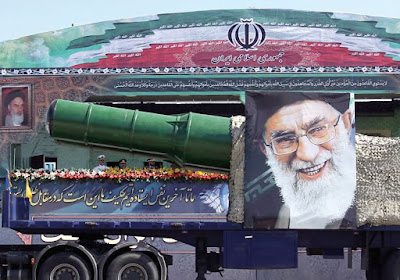 A MILITARY truck carrying a missile and a picture of Iran’s leader Ayatollah Ali Khamenei drives in a parade marking the anniversary of the Iran-Iraq war in Tehran. (photo credit:REUTERS)

WASHINGTON – Iranian Supreme Leader Ayatollah Ali Khamenei endorsed on Wednesday the Joint Comprehensive Plan of Action, paving the way for Tehran’s implementation of the nuclear deal reached with world powers last July.
Signatories of the agreement are working toward a day of implementation, which will be declared once Iran completes a specific set of tasks.
These steps include neutering its plutonium reactor, reducing its nuclear enrichment capacity and stockpile, and increasing access and transparency at its declared nuclear facilities.
As soon as Iran completes all of these steps – a process the Obama administration believes will take between two and six months – the deal will be formally implemented, and Iran will begin receiving sanctions relief.
In a statement, Khamenei said he was approving the deal, but with conditions.
He specified the process by which he expects US President Barack Obama and his European Union counterparts to remove sanctions: Through written documents which “must explicitly clarify that sanctions will be completely removed.”
The July agreement, or Joint Comprehensive Plan of Action, removes all nuclear-related sanctions, but allows the United States to maintain its sanctions on other Iranian activities, such as its endorsement of terrorist organizations and human rights abuses.
“Imposition of any sanctions at any level and under any pretext,” Khamenei said, “including repetitive and fabricated excuses like terrorism and human rights, from any of the negotiating countries, will be considered a violation of the JCPOA.”
Khamenei also said that Iran must begin preparations now for the years in which key provisions of the JCPOA sunset.
In eight years, when the deal allows Iran to update its equipment to enrich uranium, the supreme leader directed Iran’s atomic energy agency to “organize all executive dimensions of R&D so that, after an eight-year term, no technological gap would exist for enrichment.”
And the country must also prepare, he added, “to reach 190,000 SWUs [separative work units]” in 15 years – a goal Khamenei had set out before the nuclear negotiations had begun in earnest. The nuclear deal allows for Iran to expand its nuclear program on an industrial- sized scale by 2030.
Iran currently operates a model of centrifuge dubbed the IR-1— a 1970s-technology device that enriches uranium at a slow pace. According to Harvard University’s Olli Heinonen, who once served as deputy director-general of the International Atomic Energy Agency, that model, at its best, reaches a capacity of 1 SWU per year.
“In my view, [Khamenei] maintains as his goal to have a 190000 SWU/year capacity,” Heinonen told The Jerusalem Post on Wednesday. “Thus you can also say that the goal could be 190,000 centrifuges.”
“However, the IR-1s are not reliable and old technology,” he added. “This is why Iran is developing more advanced centrifuges. When the limitations of the JCPOA start to fade away after ten years, we will see other centrifuges than IR-1 emerging.”
Energy Minister Yuval Steinitz told the Post on Wednesday that the pronouncement— along with a test of ballistic missiles days before— a “finger in the eye” by Iran to the United States.
“This was well known,” Steinitz said, at an event with his American counterpart, Ernest Moniz. “This was one of our criticisms of the agreement. The agreement will meet Iran’s 190,000 centrifuges in fifteen years.”
As reported by The Jerusalem Post